Below are some of Lucas’ ebooks that have escaped into the wild. Feel free to drop by his other e-home if you like the sound of anything. 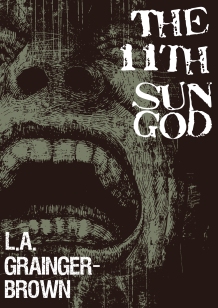 Thirteen voices from the borderlands:

James and Damien are trapped in tedious, teenage suburban existences. Both would give everything to make their imagined futures—and freedom—arrive faster.

Their paths are about to collide with a mysterious girl with moonlit eyes who, for a horrifying instant, is burning brilliantly above the grey like a comet falling to earth.

Her trajectory points to oblivion; her wake is strewn with victims. She will immerse them in a cycle of violence and terror that could destroy their hopes and sanity.

James and Damien are part of us all. We were all utopians, once.

Earth, 147 years after the voluntary dissolution of the World Government. Humankind exists in a technologically-enabled state of nature, completely and utterly free.

As the Code states, the child of freedom is madness. And that child has come of age: a splinter group of radicals draws close to the worldcortex Origin, intent on rewriting the Code that prevents humankind’s final descent into murderous anarchy.

The radicals believe the Code to be the source of the manifold evils that infest their dying world. They could very well be wrong.